Friends are you planning to travel to US or are settled in US. Then this information is going to be of interest to you. In this post we bring to you the list pf some famous hindu temples in United States of America.

Famous Hindu Temples in US

So here are some famous hindu temples in United States of America which you can visit if you are around. Have a blessed darshan.

Are you looking for mantra / strotam / bhajans etc. You can visit out mantra/strotam section.

So let us continue with our list of temples in USA.

One of the biggest Hindu temples in the United States is the Swaminarayan Akshardham Temple in Robbinsville, New Jersey. The Swaminarayan-themed mandir also has an exhibit on Indian history and culture.

Are you looking for some more informationn on Shri Swaminarayan temples? This video might be interesting for you:

One of the very first traditional Hindu temples to be built in the United States is the Lord Ganesh Temple in Flushing, New York City. The temple is a popular destination for Hindus in New York and should not be missed.

As the first and oldest Hindu temple in North America, The Hindu Temple Society of North America Sri Maha Vallabha Ganapati Devasthanam, also known as the Ganesh Temple, was founded in 1977.

One of the most important Hindu temples in the United States is the ISKCON-affiliated Sri Sri Radha Krishna Temple in Spanish Fork, Utah.

The temple offers free yoga and meditation programmes in addition to the seasonal Indian festivals of Holi, Krishna Janmashtami, and Dahi Handi.

Malibu Hindu Temple is one of the largest Hindu temples in california, dedicated to Hindu god Venkateswara and located in the city of Calabasas.

The temple was built in 1981. The temple is managed by Hindu Temple Society of Southern California.

It is a popular destination for Hindus in Southern California and was constructed in the classic South Indian style. One of the biggest Hindu temples in the region.

Both complexes feature shrines for additional gods in addition to the one that serves as the presiding deity.

Vraj Hindu Temple at Pennsylvania is one of the biggest Hindu temple in Pennsylvania, covering 300 acres of the land.

The temple is visited by a large number of people every year. Officially inagurated in 1988 this is one of the most famous hindu temples in the region.

Sri Siva Vishnu Temple (SSVT ) in Lanham Maryland is one of the largest temples in the United States of America. 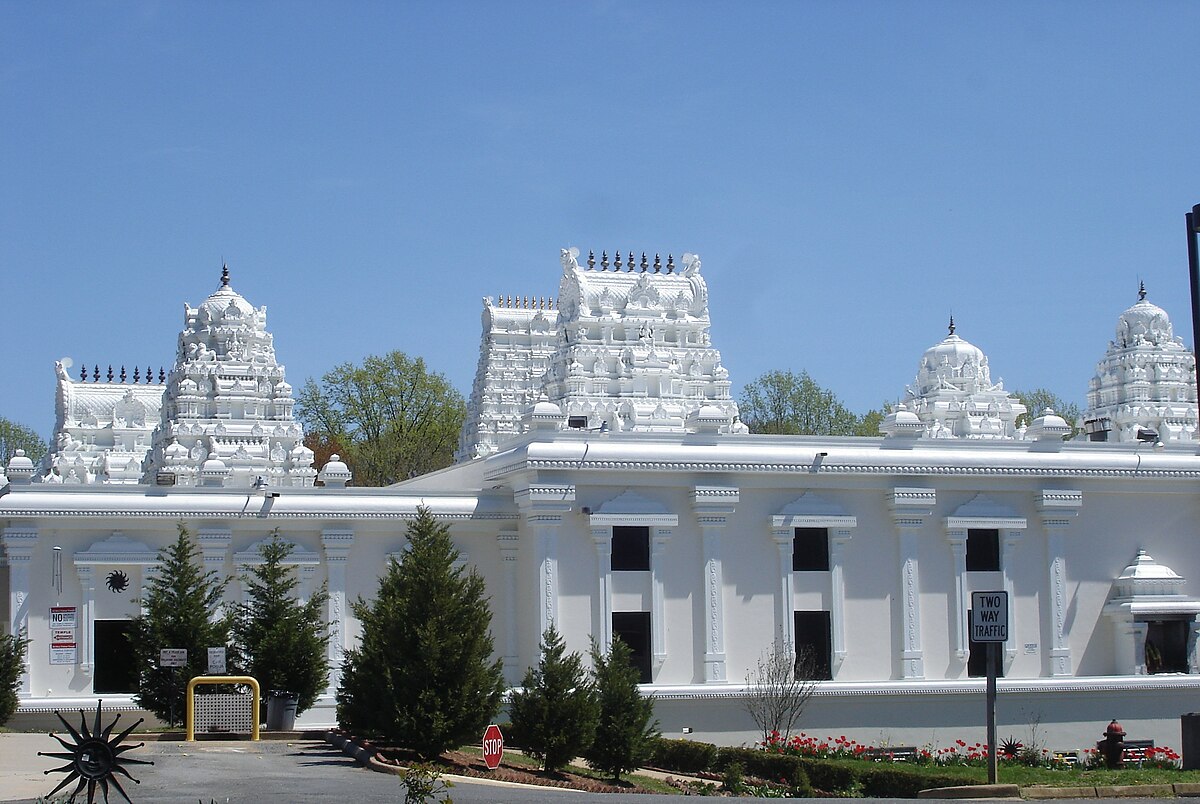 The two main dieties at the temple are Lord Vishnu as Ananthapadmanabha and Lord Shiva as Ramanathaswamy, the deity of the Rameswaram Temple.

Along with these, there are shrines for the Navagrahas, Lord Rama, Lord Krishna, Lord Ganapathi, Lord Subrahmanya, Ma Andal, Lord Hanuman, Ma Parvathi, Ma Lakshmi, Ma Saraswathi, Ma Durga, and Lord Ganapathi. Ayyappa has a separate shrine with 18 steps that is modelled after the well-known Sabarimala temple.

Another famous shri Swaminarayan tempe which is located in Houston, texas.

More details about this temple can be found at – click here

The mandir is located in the Houston suburb of Stafford and largest Hindu temple in Texas.

The temple is also known as Hindu Temple of Atlanta.

The temple is dedicated to Lord Venkateswara, and is located in the city of Riverdale near Atlanta.

The complex has two temple one complex with Lord Venkateswara and other with Lord Shiva.

One of the most fmaous temples in Chicago area, is a must visit temple if you are around. The temple is located Lemont , Illinois.

The temple also has a seperate Spiritual Center which is named after Swami Vivekananda which is on Vivekananda Hill which is small hill lock in the temple premises.

The temple is located in Marshall County.

This ISKCON temple is named after lord kirsha’s Vrindavan.

Murugan Temple of North America is the first Lord Murugan temple in the United States, located in Lanham, Maryland.

click here for the driving directions to the temple

Sri Venkateswara Swami Temple at Aurora is the most famous temple of Balaji in Greater Chicago area.

Its a beautiful temple, but located a bit far from the city.

The temple is visited by a lot of devotees each year.

More details about this temple can be found at : BAPS Atlanta

The themple was inagurated on  26 August 2007 by the BAPS swaminarayan sanstha. The mandir in the Atlanta suburb of Lilburn was built in accordance with historic Hindu architectural texts.

Aso have a look at the Akshar Dham Temple – New Delhi.

Sri Meenakshi Temple in Houston of Texas is one of the must visit temples if you are in the city.

Shri Meenakshi temple in texas is one of its kind outside of India, dedicated to goddess Meenakshi. We all know about the famous Meenakshi Amman temple in Madurai in Tamil Nadu, India.

Meenakshi Amman teomple in pearland texas is one of the famous hindu Temples in United States of America and is an important cultural destination for people in the city.

Sankat Mochan Hanuman Temple at Watsonville is built on the beautiful green hills of Mt Madonna.

You can find the link here for directions to reach the temple.

The temple is approximately 2 hours drive from south of San Francisco.

The temple is located on South Mccully Drive.

This is the first hindu temple to be constructed in Delaware.

The main deity is Goddess Mahalakshmi and one of the must visit Hindu temples in delaware.

This temple is built in traditional Dravidian South Indian style.

Connecticut’s first ever Shri Shirdi Sai Baba Temple was inaugurated on Nov 27, 2009. 2ft. tall Sai Baba statue was installed on the same day. The Temple is currently operating in a rental place.

Temple has Prayer Hall and Dwarakamayi in its premises. There is a publications stall where devotees can buy books and CDs related to Baba. The stall also has Baba idols for purchase.

The new temple is under construction. More updates can be found at https://shirdisaitemplect.org/new-temple-construction-updates/