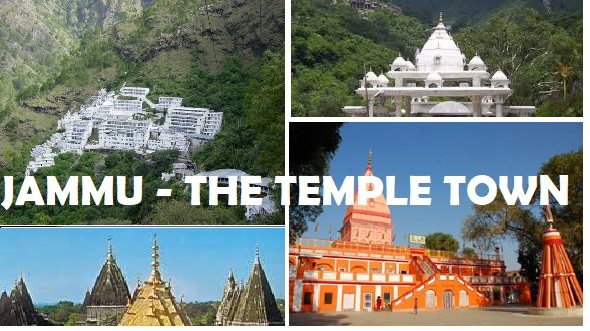 Friends, today we introduce a new series on our blog. In these posts we will talk about various towns in our country which are well known as temple towns. Today lets talk about famous temples in Jammu.

So friends we start our this series by knowing more about Jammu, which is our first temple town post.

Situated on the banks of river Tavi, Jammu is at the foot hills of Himalayas, but we all know it is famous for one of the most revered temple, the temple of Ma Vaishnov Devi.

Jammu is the base camp of this holy Shrine of Hindus. But very few of us know that Jammu is a town of many important and beautiful temples. It is believed that Jammu was established by the king Jamboo Lochan in the 14th century BC.

The shrine of Ma Vaishnov Devi is one of the most visited shrine in the country. The temple is dedicated to Ma Vaishnov devi, a manisfestation of mother goddess. She is also fondly called as Mata Rani. The temple is situated near the town of Katra which is in Udhampur district.

The temple of Mata Rani is visited by more than 1 crore people every year and hence it is one of the most visited temple in Jammu and India.

But the city of Jammu also has many temples which are historically important and are must visit.

This temple is situated in the Bahu Fort complex. Bahu fort is situated at the left bank of river Tavi. This fort is probably the oldest fort constructed originally by Raja Bahulochan and is said to be more than 3000 years old. The temple is inside this fort and is dedicated to goddess Kali also know has Bave wali mata.

Bavw Wali Mata is the presiding diety of Jammu and is a must visit if you plan to visit Jammu.

Tuesdays and Sundays are special days here for Pooja.

It is another prominent temple of Jammu. Situated right at the heart of the city, the temple complex consists of seven hindu shrines. It is more than 140 year old temple. It is said that temple construction was started by Maharaja Gulab Singh, the founder of Jammu and Kashmir in the year 1835 AD and was completed by Maharaja Ranbir singh in `1860 AD.

The main temple is dedicated to Lord Rama and other gods and goddesses of the epic Ramayana.

This is a well known Shiva temple of Jammu. The temple is unique that there are 12 Shiva Lingams here measuring 12 to 18 inches. And there are galleries with thousands of Shaligram fixed on the stone slabs.

Another temple related to Ramayana times. I is said that the famous Ramayan charater, Jamwant used to meditate in this cave. This is also a well know Shiva temple on the banks of river Tavi.

There are many other well known temple in Jammu. If you have time you can plan to visit them as well.

So freinds do visit Jammu and these temples and do write back you experience.