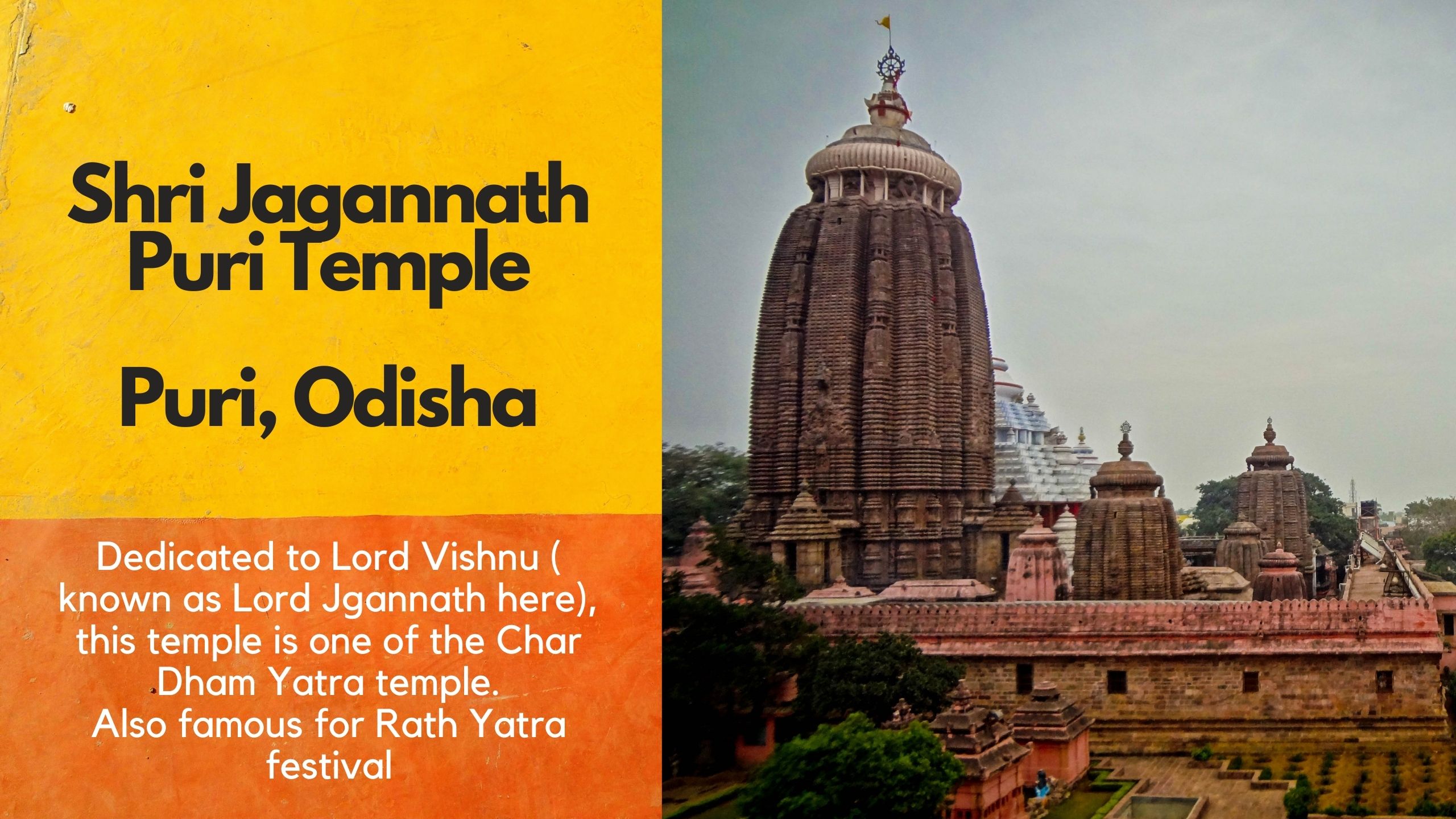 Shri Jagannath Puri temple is a sacred temple built in the 11th century in the city of Puri. Its construction was ordered by King Indrayumna. The place is called as Jagannath Puri .

This magnificent puri temple is dedicated to Lord Vishnu also known as Lord Jagannath. This temple is among the pious pilgrims that have been included in the Char Dham yatra. Others being in Badrinath, Rameshwaram, and Dwarka.

The whole puri temple complex has many small temples as well, so it feels like a small city for Gods. There are four main gates of the Jagannath Puri.

The mahaprasadam is a must-have. The food is not just scrumptious but also feels like it comes straight from heaven. Cooked in one of the largest community kitchens in India.

The Rath Yatra is a very colourful festival which is the speciality of this temple. The rituals and the vigour among the devotees are something you are sure not to miss.

In the beginning, Lord Jagannath was worshipped in a forest secretly as Lord Neela Madhaba by King Viswavasu.

King Indrayumna was very curious and wanted to know more about the deity. He sent a brahmin named Vidyapati to inquire.

But all the efforts made by him went in vain. During all this, the brahmin fell in love with the daughter of Viswavasu.

After marriage, the king took his son in law blindfolded to the spot in the cave to see the god he was worshiping.

On his way, Vidyapati started to drop mustard seeds to form a secret pathway. Thereafter king Indrayumna went there to see the idols but could not find them.

One night in sleep a voice told him to construct a temple dedicated to Lord Vishnu. The voice also directed him towards logs floating in the sea.

He ordered to make idols out of that wood. The idols had been made of Jagannath, Subhadra, and Balabhadra.

The architecture of the Shri Jagannath Puri Temple:

The Jagannath temple is among the most sacred pilgrims in India for Hindus. It has mesmerising architecture. The temple is made in classical oriyan style.

The area covered is around 4,00,000 sq feet. The outer wall is called Meghananda Pacheri. It is around 20 feet high. The main Shikhar is higher than others in the complex.

The Lion Gate is the main gate for entrance. On top of the temple is a wheel called the Neela chakra because of its blue colour.

This is made of many different metals together. A new flag is hoisted on the wheel every day.

The temple is open all throughout the year. But the time of Rath Yatra is the best time to visit in the month of June or July.

You will be able to feel and experience the real devotion of the devotees. There special timings for the arti.

One can go there in the winter season as it will be pleasant as compared to the summers when it is quite hot and humid. You will be able to stay out in the sun longer.

How can you reach Jagannath Puri?

This is the most important festival; in fact, the whole country celebrates it in honour of this Jagannath temple each year.

It occurs in the month of June or July. In this, the three main idols are taken out of the temple and mounted on three huge and amazingly decorated chariots. The route is from Bada Danda to the Gundicha temple.

After completing nine days the idols are brought back to the main temple. This yatra too has a special name, Bahuda yatra.

The chariots are pulled by thousands of devotees, while the prince of the state brooms the road ahead.

This is done to show that he does not hold any ego in front of the Lord. All the devotees dance and sing prayers while pulling the chariots.

This is a 21-day festival. The idols along with the idol of Lord Shiva from 5 temples are taken to the Narendra temple and placed in beautifully decorated boats. They are then worshipped there.

special dresses are made for the deities. Boiled rice mixed with candy and juices is offered as a part of the worship. This festival is related to agriculture.

It is a fine beach in the eastern part of India. it is just 35 km from the sun temple.

On a sunrise, the sun reflects in the pristine waters and creates a magical aura. Devotees also take a dip in the sea before visiting Jagannath Temple.

Many sand sculptures by famous sand artists can be seen on this beach. There are a few water sports also available. Horse riding is very common.