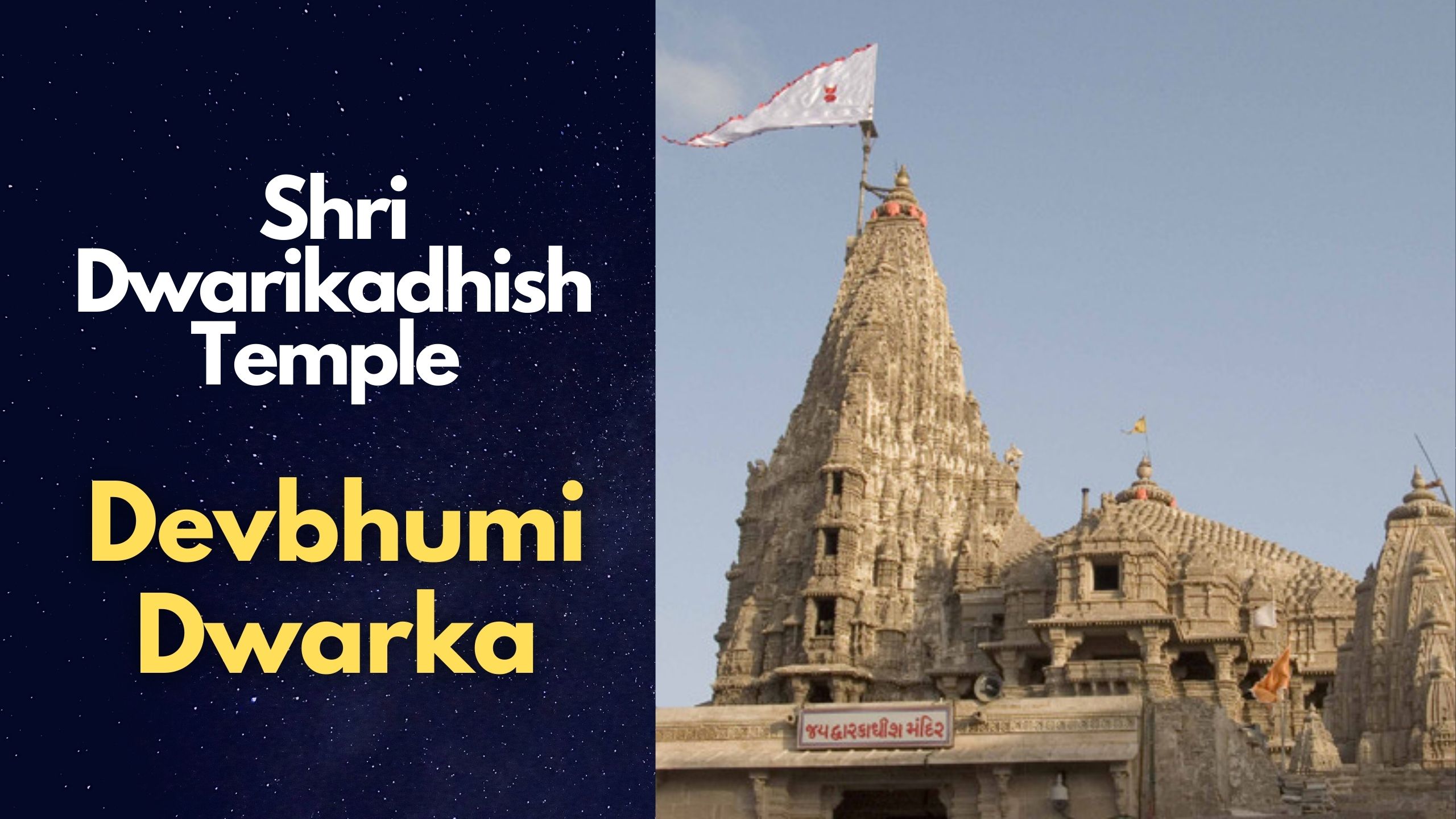 Friends welcome to the kingdom of Lord Krishna, the city of Dwarka. And the main attraction of Dwarka city is the Shri Dwarikadhish temple which is dedicated to Lord Krishna himself.

Shri Dwarikadhish temple is more than 2500 years old. The temple is situated on the top of a small hill that takes 50 steps to reach there.

Another impressive thing that one may notice is the flag, which is made of 52 yards of cloth.

This is seen fluttering due to the soft breeze blowing from the Arabian sea. There are two main doors to enter the temple and exit. They have been beautifully named as swarg and moksha dwars.

This temple is among the char Dham yatra pilgrims, which hold a special place for all Hindus. The others are at Badrinath, Jagannath, and Rameshwaram.

This city is believed to have been built by Lord Krishna when he came from Brij Bhoomi. It is also believed that the land was under the sea.

About the Shri Dwarikadhish Temple:

The temple is known as Jagat Mandir. It is dedicated to Lord Krishna and was made by his great-grandson Vajra Nabha.

He had built it over the land that was reclaimed from the sea. The architecture is based on the Chalukya style.

The city has been dated to the days of Mahabharata. The temple is five-storied and made of limestone and sand only.

There are intricate sculptures and the fineness of the artisans can be seen. The main idol of Lord Krishna is made of black stone.

In the temple complex, there are other shrines as well. These are dedicated to Subhadra, Vasudeva, Rukmini, and Balarama among many others. as a ritual, the devotees take a dip in the holy Gomti river before they enter the temple.

The Janmashtami festival is celebrated with joy and enthusiasm. At this time millions of devotees throng the temple on the same day.

There are prayers and rituals the whole day. The shrine can be considered as a hive of voices, colors, and faith all intertwining to give a surreal experience.

The story behind the temple is very interesting. The temple is believed to be built by Vajra Nabha the grandson of Lord Krishna.

The name has been fondly kept as Dwarikadhish meaning the lord of Dwarka. The prestigious temple is among the four main pilgrims in the Char Dham yatra.

The temple is also among the 108 Divya Desam related to Lord Vishnu that has been mentioned in the old texts such as Divya Prabhanda.

The legend related to the Idol of lord Dwarikadhish:

Limestone and sand have been used to build this temple. The temple is five stories tall. There are 72 pillars in all. All of them have been carved intricately.

The flag has the symbols of a sun and a moon that symbolize the reign of Lord Krishna over the area for as long as the sun and the moon shall exist.

There are 2 main gates of the temple. One for the entrance and the other for exit. The entry gate has been named Swarg Dwar and the exit door is known as the Moksha dwar.

On the south side of the temple, there are 56 steps that lead to the gomti river.

Though the devotees throng the temple alike throughout the year, you can go in winter. There is pleasant weather from October to March.

If you are interested to visit the temple on the occasion of Janmashtmi then you must plan ahead and go in the month of September.

Dwarkadhish Temple darshan timings – The Darshan start from 6:30 am in the morning to 1 pm in the afternoon

After that the darshan is closed till 5 PM

And then from 5 pm in the evening till 9:30 pm at night temple is open.

These timings are for all the days.

You can check the link below

How to reach Dwarikadhish Temple

You can go by road from closeby cities, there are good highways in the area.

If you wish to go by train, the nearest station will be Ahemdabad, and then you will have to take a cab or bus.

For those who wish to go by air, the nearest airport is Rajkot, from here you will need to hire a cab or take a bus.

Other places of interest close by

Where is Dwarikadhish temple located?

Dwarikadhish temple is located in the city of Dwarka, the state of Gujarat in India.

What are the 4 Char Dhams cities in India?

How old is Shri Dwarikadhish temple?

Does Dwarka has railway station?

Yes, the city of Dwarka has a railway station and if your city does not have a direct connectivity to Dwarka then you can also plan to travel to other near by railway stations like Porabandar, Ahemdabad, Jamnagar, Rajkot. Then from there you can take taxi or other public transport

Which is the nearest Airport to Dwarka

You can fly till Ahemdabad or Porbandar and then take taxi or other public transport. Remeber that Dwarka does not have a airport.

Betdwarka is also part of dev bhumi Dwarka , but it is a small island in the sea and has temples dedicated to Lord Krishna and many others. After you have visited the DwarkaDhish temple you can plan to visit Bet Dwarka. You need to take a boat to go there. There are tour operators who can book the complete package for you.

How far is Dwarikadhish temple from Dwarka railway station?

The main temple os around 2 Kms from Dwarka railway station.

What are Shr DwarkaDish Temple timings.

Shri Nageshwar Jyotirlinga temple is around 17 Kms from Dwarakdhish temple and will take about 20 mins to reach.